WARNING: CONTAINS SPOILERS FOR THE ENTIRE NOVEL. DO NOT READ IF YOU HAVE NOT READ THE BOOK OR WISH TO DO SO IN THE FUTURE.

You can find a synopsis here.

This was recommended by “ChapterStackss” of BookTube as one of her favorite horror novels so I thought I’d give it a shot.

It’s difficult to pick a topic in this book for discussion. It was so mouth-wateringly good I’m left babbling incoherently.

I’ve decided to break up my thoughts into pieces so it’s less of a jumble.

One aspect of this novel that I love is it turns traditional horror on its head. The darkness is the protagonist’s greatest defense against the enemy rather than a means for the main baddy to attack.

They aren’t afraid of what will happen to them when they close their eyes, but rather when they open them.

If this is meant to be a metaphor for truth, infinity, or whatever it’s done a lot more effectively than in any other novel that I’ve read.

I still can’t get over how exceptionally well paced this piece is. No chapter seems too long or too short. They all seem to be exactly as they need to be.

A horror writer has created a new monster.

It’s not that traditional monsters like ghosts and zombies aren’t scary, it’s just that they’ve been done  to death at this point.

Don’t get me started on zombies. 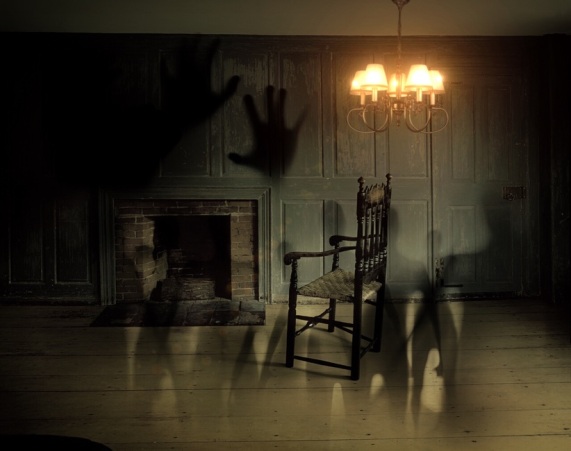 My favorite theory as to what these things are is George’s: these beings are from another dimension that is bleeding into ours. Because our bubbles were never supposed to merge, it’s too much for our brains to handle.

Maybe these things are us from another dimension!

We never find out.

I realize there is more fear in the unknown, so revealing what these things are would ruin a lot of the intrigue, but I really want to know. I want to shake down the writer and demand he tell me.

Regardless, the mystery of these beings forces the reader to devise their own explanation. This makes the threat as psychological as it is physical.

There are no silver bullets or wooden stakes to defeat them. Humans can only take preventative measures to make sure they aren’t driven to madness.

In my opinion, one of the things that makes this book so great is how atmospheric it is. Since the characters are often blindfolded, the narrative is mostly told through sounds and senses.

The monsters are represented in the crunching of leaves, the sudden footstep, the screaming of the birds.

The characters hear the monster.

But they can never know what one looks like because no one that has spotted one  has lived to tell about it. Except Gary. Screw Gary.

I just love the image of Malorie and her two children rowing down a river where they can see nothing. They’re surrounded on all sides by possible dangers: deranged animals, madmen, and the elements.

Malorie is completely reliant on the superpowered hearing of the children who can detect any noise from a great distance away. She’s trained them since birth to do this and some of the things they hear are chilling.

If I have one nitpick about this book it’s that some of them are not as fleshed out as others. Nevertheless, I still think I have a rough idea of who they are as people.

My favorite characters have to be Malorie and Tom.

Malorie was a great character because she had to worry about the life of her baby as well as herself. Once her child and Olympia’s child are born, she demonstrates an astounding amount of resilience as well as humanity. She breaks down, she makes mistakes, she second-guesses almost everything she does. She’s a great protagonist all around.

It’s hard not to like Tom since he has the most backstory aside from Malorie. He’s a great leader and loves everyone under his charge. I was unsurprised, but sad when he died.

The only characters I actively dislike are Don and Gary.

I wish he’d gotten his come uppins in the end, but I guess you can’t have it all.

While there is some tension between them at some points, their relationship with each other is mostly harmonious. They act as a family throughout and genuinely care about one another.

Even though Malorie is giving birth in unendurable agony and knows that Don is betraying them as she speaks, she still loves him like a brother and wants someone to help him because he’s losing his mind.

That is some serious character development.

And there are no unnecessary romances.

I think Malorie has romantic feelings for Tom, but this is implied rather than shoved in the reader’s face.

I’m actually surprised this book ended with Malorie and her children being found by a group of refugees.

I thought it was going to conclude with her seeing one of the creatures and killing the children before committing suicide.

Am I a sadist for being just a pinch disappointed this didn’t happen? My logic is we would have finally found out what these things are. We’d get an intimate look into what people that see them go through on a personal level.

On the other hand, the girl probably deserves a hopeful ending after all the crap she’s had to survive through.

I don’t reread books very often, but I may make an exception for Bird Box.

One thought on “Thoughts on “Bird Box” by Josh Malerman”