A special thanks to theorangutanlibrarian for nominating me for this award! I’m honored to be receiving it and I enjoyed making this post!

Where’s the best place you’ve ever been on holiday?

I’m not sure if this counts as a holiday since this was part of a study tour for college, but I would have to say the best place I have ever gone to was Ireland. There was so much natural and ancient beauty there it bewitched me from the moment we landed. My favorite place out of the trip had to be Tollymore Forest on our Game of Thrones tour where they shot a bit of the first episode. And they gave us cloaks! 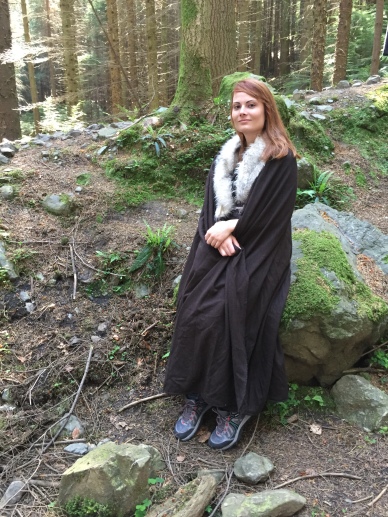 Do you have any favorite fictional (or non fictional) libraries?

Hmmmm I suppose I would have to say the first library I ever went to. There’s nothing special about it in terms of aesthetic or book choices (apart from the modest aquarium), but it’s the first ever library I’ve ever gone to which helped foster my love of books so it will always hold a place in my heart.

What is your guiltiest pleasure read?

I suppose that would be Twilight. I haven’t read it in over ten years so I don’t know if I would still like it or not, but I still remember it fondly. I maintain to this day that it’s the most over-hated book in existence. I think I will write a post about this eventually.

What’s your most unpopular bookish opinion?

I found The Night Circus by Erin Morgenstern incredibly boring.

I know! I know! Dozens of friends have told me they love it, but I…I just don’t get it.

I’ve attempted to read it twice and each time I’ve been disappointed. The premise is intriguing and I liked the atmosphere, but there was too little happening for too long. I made it slightly over halfway through the second time before I gave up.

I don’t begrudge others for liking it, though.

Do you have a bookish pet peeve?

I have a few, but a deal-breaker for me is unnatural dialogue. I can deal with slow pacing, Maguffins and the like but if the characters sound like AIs that can’t pass the Turing Test I’m out. This is the reason I stopped reading The Man in The High Castle. I loved the idea behind it and was interested in where the story was going, nevertheless, the characters sounded so unrealistic and stilted that I couldn’t go on.

Dialogue is one of the most important tools a writer has in their arsenal to convey a character’s personality and if you screw that up you might as well pack your bags and go home.

What book character gets on your last nerve?

Zoe Redbird from The House of Night series. When I read the first book in high school, I thought she was a pretty cool chick. She was nerdy (allegedly, the only evidence we have for this is her Spock hoodie), she liked Enya, she had a kick-ass name.

But then she started doing shady shit and her character took a turn for the worst around book three.

In essence, she became a Mary-Sue of the highest order; the girl literally every guy wanted to be with. People give Twilight a hard time for being a love triangle when this chick was in a frigging love pentagram.

EVERYONE IN THE BOOKS WANTED TO RIDE HER.

Not to mention, no matter how many horrible things she did, she was always portrayed as the victim. She cheated on her boyfriend with a teacher, and when said teacher turned out to be a villain (imagine my shock), her friends berated her ex-boyfriend for giving her a hard time… for cheating on him!

Everything Zoe does is right.

She’s naturally gifted in literally everything.

It’s a shame because, from what I remember, the rest of the series was enjoyable. I just couldn’t deal with the main character anymore.

If you could wear any item of clothing from a book-what would it be?

Who could you rather kiss/marry/kill when the choices are Lord Voldemort, Sauron, and Iago?

I would kill Voldemort because there’s no way I’m waking up to that every morning. I would kiss Iago because he actually has lips and I would marry Sauron because he is the OP villain all others aspire to be.

Most books I read don’t necessarily have a mustache twirling villain, but I suppose it would be Drood from Dan Simmon’s Drood. He’s the mysterious character which Dicken’s wrote his unfinished novel about before his death. If you’re interested in reading it, here’s a link.

Would you rather be the villain in a story of the hero? Why?

Conventional wisdom says I should choose hero because they are the victors in most stories. However, I think it might be fun to be a bad guy. Being a good person is exhausting and it’s so much easier to be an asshole. Plus villains usually equate to more complex characterizations and I’m about me some complex characters.

Do you have any exciting reading plans?

I’m excited to be reading Love and Ruin by Paula McLain. I love, love, love The Paris Wife and her writing style so I’m pumped about this one. I also plan to tuck into My Brilliant Friend by Elena Ferrante in the near future.

I’m interested in seeing what you guys come up with!

Sofi@ A Book. A Thought. Jennifer of OutofBabel.com dysfunctionalliteracy  TheInnerWorkings TheBookRaven  Anna @ My Bookish Dreams  By Hook or By Book Nut Free Nerd Bionic Book Nerd Jedi By Knight Adventures of a Bibliophile