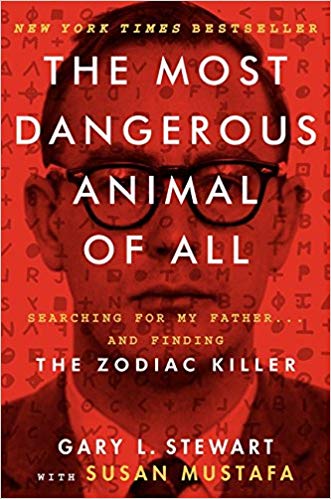 “My father wrapped me tightly in the dirty blue blanket and laid me there on the floor, making sure the pacifier was in my mouth so I would not cry before he was able to make his escape. He turned away, leaving me alone on the stairwell, clad only in a white towel that served as my diaper. Decades later, I would realize that the day my father abandoned me was the luckiest day of my life”

After thirty-nine years of zero contact, Gary Stewart is reached by his biological mother, hoping to form a connection. Elated, Gary accepts her offer and learns as much about his parentage as he can. However, the more he learns about his father, the more complicated things become.

Not only was his father a criminal, wife-beater, and a statutory rapist, he might have possibly been one of the more notorious serial-killers in American history: the Zodiac Killer.

“The Most Dangerous Animal of All” is unlike any true-crime book I’ve ever read.

In fact, to call it a true-crime book is being overly simplistic. It’s not just a book about a murderer and his victims, it’s also about survival and the power of hope in the face of insurmountable odds.

I enjoyed the book for the same reason a lot of people didn’t. I scrolled through several one-star reviews on GoodReads, complaining this wasn’t like most true-crime books and it read too much like a novel.

I, personally, liked this stylistic choice, even if it took away some of the authenticity. Of course, as many reviewers pointed out, there is no way Stewart could know about conversations that took place decades before his birth, nor is it likely he had perfect recall of discussions he himself had with other people. But when you are dealing with a book like this, it can be necessary to take some artistic license provided you are true to the character of those involved.

Now, of course, there is the question as to whether or not Earl Van Best, Gary Stewart’s father, actually was the Zodiac killer. From the evidence he compiled to make his case, I would be very, very surprised if he wasn’t.

I don’t want to give too much away as I encourage you to read this book on your own, but I will say that the evidence Stewart presents is compelling. Many might call it circumstantial, but if he isn’t the Zodiac Killer, there is a hell of a lot of coincidences that need to be accounted for.

If you plan on reading this book, I suggest you do so on a weekend because, frankly, you’re not going to be doing much else. It hooks you in from the very beginning and won’t let you go until the end. I read the whole thing in about two days time and I imagine more ambitious readers would be able to knock it out in one.

It’s honestly difficult to say anything bad about it.

Perhaps the dialogue was a bit too stilted.

The repeating of information we already knew towards the end was a bit tiresome, nevertheless, I have few gripes with this book. I recommend it to anyone, even if you aren’t a fan of most traditional true-crime stories.